Finally: root for the milestone! Today at 00:48 am SeraphimSerapis released a modified update.zip witch roots the 2.0 firmware of the Motorola Milestone. In the following I will document the process for rooting my device. This howto is for the Milestone NOT the droid.

Step 1. Getting the update.zip

Download the update.zip from one of the following locations and rename it, when its not named update.zip yet.

Use your usb cable to connect your phone to your computer and copy the update.zip to the root of your sd card.

Step 3. Turn off your phone

Hold the button on the top right of the device and shutdown the phone.

Step 4. Get into recovery mode

Press and hold the camera button and the power button until a sign with an exclamation mark appears. (see picture) 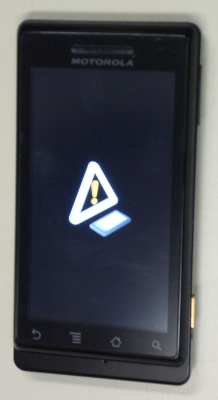 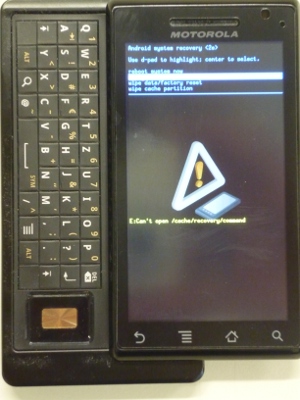 Press the golden button of the d-pad and wait. Yellow text should appear saying something like: 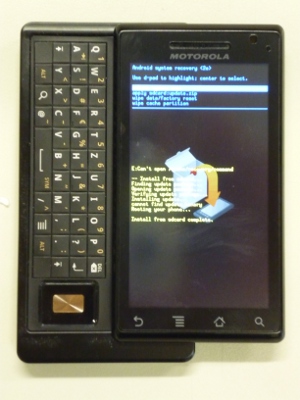 Choose "reboot system now" from the menu and wait. After the reboot your device should be rooted. You can test this by typing "su" in a terminal emulator. Something like in the picture should pop up. 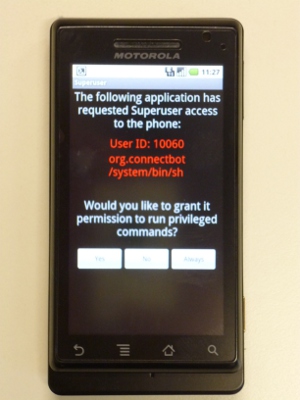 It is possible that you get errors (in my case there where none) but when you get errors the advice from the creator of the patched update is to retry the process till it works.

Root on the Milestone was made possible by:

The original howto i used is located here (in german): android-hilfe.de